The Nazi Swastika and the Japanese Rising Sun Flag

Over the past few months an issue has kept on raising its head from time to time and that is the Korean outrage over the use of the Japanese Rising Sun/Imperial flag.  Now that my consciousness has been raised to this symbol, I am starting to notice it everywhere.

To be fair, one only has to whisper the word 'Japan' in Korea and many people become slightly upset, but a lot of Koreans compare the symbolism of the Japanese Rising Sun flag to the Nazi Swastika and say that to them the meaning is just as insulting and offensive.  I have also heard voices of discontent from the Chinese on this as well.

Is it really comparable or is it just an excuse for the Koreans and the Chinese to find yet another thing to dwell on about the Japanese and be outraged about?  I have noticed that Koreans do tend to use outrage and guilt as a way of justifying arguments against the Japanese.  They also have a way of promoting these ideas to everyone in the country, including young people and this creates a kind of patriotic moral fury, clouding logic and facts.  An example can be found in my school where they give out what, to my eyes, is a propagnada booklet on the historical ownership of Dokdo/Takeshima/Liancourt Rocks from the North East Asian Historical Society (roughly translated into 'The Korean Society for Justifying Korean Ownership of Dokdo').  The North East Asian Historical Society is actually a Korean group working out of Harvard University.

While I do have a fair amount of scepticism about many of the current subjects that people in Korea and China get upset about regarding the Japanese and how they go about making sure outrage and nationalism continues to fester in their young people, I really cannot help but also think they have some right to be unhappy.  Along with this, I do believe the Japanese also enjoy being subtley (and sometimes not so subtley) offensive and insensitive about their past wrongdoings.

As someone whose ancestors were colionalists themselves, I have to say I get a bit weary of the same old tired argument rearing its head when I have anything negative to say about another culture; this follows the same predictable path of, "You're a white Westerner, you can't say that.  You are the great grandson of slave owners, how dare you snobbily hold an opinion about others when your own country's history oppressed so many."  How long will this tired line be accepted by reasonable people?  It is nonsense; logic and reason is the best means of argument, not appeals to feelings of guilt.  I am not a slave owner, I do not oppress people, I am not an Empire builder, that's all you need to know.  Let's get to the point, is what I'm saying right or wrong?  Let's discuss, without pointing fingers to deeds that should be left in the past.

In this way, I can sympathise with the Japanese, they must be a bit fed up of defending themselves from actions that most of them had no hand in committing.  That said, there are ways in which you can bring these kind of lines of discussion upon yourself and I think the Japanese play a hand in continuing this kind of rhetoric.  The Japanese Imperial flag is just one way they achieve this, but there are many others, like I mentioned in a previous post on Korean and Japanese Rivalry.  To summarise it all, in a nutshell they really don't appear to be genuinely apologetic about a great deal of their crimes during their colonial period and during the Second World War.  Japanese politicians especially, seem to be incredibly heavy-footed in their dealings with sensitive historical matters.

Things are so incredibly different in Europe; I am sure that there are still issues of resentment regarding Nazi Germany and the lands it occupied (I had one Czech reader who commented that there is still bitterness in this area) but there is a marked difference in how Germany is perceived by its neighbours in Europe and how Japan is seen in Far East Asia.  It is a topic one could write extensively over, so I will simply concentrate on the purpose of this post and that is to concentrate on the two flags - the Swastika and the Imperial flag - and make some comparisons.

It is my opinion that they are not the same and also that the countries that adopted them, as well as the countries affected by them, also have completely different attitudes.

Firstly, the Nazi Swastika was not the country's flag, it was an ideological and political flag.  A symbol of German national socialism and was not related to the country before the rise of the Nazis to power.  The Japanese Imperial flag was not a symbol of an ideology, although was a symbol of the military and subsequently became a symbol of being conquered and oppressed by the Japanese.  I think this is a subtle but important difference. It is still insensitive and unnecessary, but considering almost every country has a military, one can see that it is possible to make a logical and historical argument to continue its use in this way.  The British Union Jack, for example, is not perceived in this way by the countries the British occupied.  Perhaps it does make the situation worse because the Japanese have an option of using a different flag, however.  One cannot make such an argument for the Nazi Swastika; it has a meaning that goes beyond the military and even beyond imperialism.

The next observation is the difference in how each of the flags is perceived by both the previous owners and those oppressed in their shadow.  To illustrate this, a while ago I made the error of displaying the picture below in a class I was taking based around the theme of computer games.  One of the games I remember from when I was younger was Streetfighter 2, so I unwittingly showed a scene from the Sumo character fighting in Japan, not noticing that the Japanese Imperial flag was part of the background.  In the first class I showed it to, I was immediately rebuked and I apologised saying that I had honestly not recognised it.  They went on to explain the significance and its relation to the offence caused by the Nazi Swastika in the West. 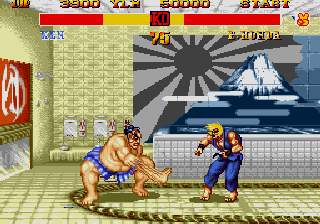 Afterwards, I performed a few thought experiments in my head: a) Would British students back home have noticed or been so outraged if there was a subtle Swastika in the background?  I thought this was highly unlikely; b) Would Jewish students realise or care about a similar situation but with the Swastika?  In this I could only speculate, I strongly suspect yes, but would not be that sure without an actual experiment (don't worry, I am not going to try it!); c) Would Japanese students notice or be upset by the Imperial flag in the background?  Well, perhaps not considering that the game in the first place was Japanese made, although I have heard some Japanese take offence to this flag; d) Would German students care about a Nazi Swastika being displayed in the background of a video game, then displayed in class?  I thought that this was the easiest one to answer, which is definitely, yes.

From these four situations it is a little difficult to tell whether my Korean students were over-reacting or being made to care about the flag issue.  I suspect there is some genuine moral outrage but also some propagandising of the situation in Korea, much like they propagandise the issue of Dokdo and the East Sea/Sea of Japan disputes.  What can be easily recognised, however, is that Germans have a much greater feeling of shame over their previous adoption of the Nazi flag compared to the Japanese and their adoption of its imperial flag.  I think the reasons for this are two-fold: 1) the German people and successive governments have done a much better job of public relations with regard to other countries since the end of the Second World War.  They have been genuinely apologetic and have admitted to and denounced Nazism and its symbol as a country and because of this their reputation has really thrived and is one of the most respected and envied countries in the world; and 2) like I said before, the meaning that the Imperial flag carries is not so devisive, and especially not to the Japanese, meaning to them little more than a sign of their military, maybe their colonial power in the past, but not an evil ideology.

In conclusion then, I don't believe the two flags are equivolent; they do carry slightly different meanings but I think the Japanese are playing subtle little mind games with their neighbours and are generally a little insensitive by still using the flag.  What also doesn't help is that the Imperial flag is quite nice looking and I think it looks attractive to Japanese and other countries when they represent Japan.  Here is a few recent events that have caused some outrage in Korea regarding the use of the Japanese Imperial flag and some other little things I have noticed also:

London 2012 Olympics - Japanese team wear the design on some of their team tracksuits, but a Korean soccer player is punished for holding a 'Dokdo is our land' protest sign after winning their bronze medal match with Japan.

George Saint Pierre - enters the ring sporting its design on his Gi and is rebuked by fellow UFC fighter known as the Korean zombie.

Battleship (2012 Movie) - couldn't help but notice the Japanese Imperial flag plastered all over the scene where they are playing a soccer match.  However, if there is a time to use this particular flag it would be in a naval situation as the design with the middle spot moved slightly to the left was the flag of the Japanese navy.

British Sushi Company - had the Imperial flag as its logo and a Korean exchange student in Northern Ireland requested for it to be removed.

A Korean University student's artwork - caused quite a stir earlier this year when it was leaked onto social media.  The nationalists of Japan held a anti-Korea protest because of this.

A Korean Politician - does her election chances no favours back in 2012. 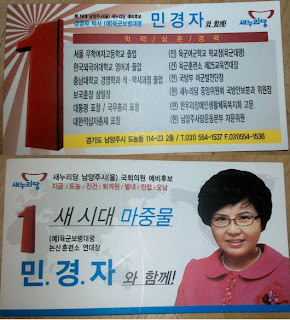 Japanese sports fans - often wave the Rising Sun flag while supporting their teams.  The picture below is taken from the London Olympics, but it has also been present at many other sporting occasions, including baseball games and soccer matches.

Email ThisBlogThis!Share to TwitterShare to FacebookShare to Pinterest
Labels: Morals and Ethics