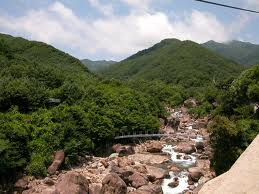 As well as the more controversial article I wrote the other week, I also posted a piece to another website, which was an adaptation of my blog post on my Korean family.  I again received praise but also some quite fierce criticism.  Most of the criticism was based around the argument that I was not trying hard enough with my Korean family.  To summarise what was said I essentially needed to learn more Korean, stop being so selfish, not be so tight, and generally pull my finger out.

On the other hand it was interesting to see where most of the praise and sympathy for my article came from. Almost every time I have had positive comments from readers of my blogs or articles (from articles to do with my Korean family) they have come from Koreans.  I think this is because many Koreans have the same frustrations as I do with their in-laws.  I think most of the negative comments come from Westerners who have a highly politically correct and idealistic attitude towards life, after all I would not be the first to be uncomfortable with their in-laws, regardless of culture.  A few came from Western men married to Korean women in the same position as me, but many came from people who could not really understand my position.

It is important, however, when one receives criticism to analyse it to see if it is justified.  My critics for this piece were not calling me names or building up straw men.  These people had read the article and they disagreed with my attitude and behaviour towards my Korean family.  Did they have a point?  I think it would be very unwise of me to dismiss what they said, they did have a good point although without really understanding my own family background may be they could not know if I was being genuinely lazy or whether these sorts of situations are, frankly, more difficult for me than most people.

With all this in mind it was quite a coincidence that last week my wife, her family, and I were due to go away for the weekend for a family trip to a valley in the mountains.  I had accepted some of the criticism and was set on trying harder and trying to fit in and enjoy myself more in their company.  We had a 'pension' booked in the mountains.  This is a small house that you can hire for a day or so, this is what the word 'pension' means.  The origins of the word appear to be from English, but I have never heard of it meaning a house for hire in the countryside. 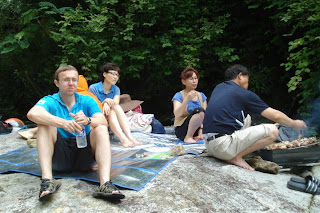 The first day was actually rather nice, we found a spot on the river, had a barbecue with lots of food and then cooled off for a swim.  After this we checked into our accommodation for the rest of the day and night.  It was very pleasant, crucially with air conditioning but as always no chairs, just the floor.  We ate more food, then some more, everyone had a afternoon nap and was then ready for even more food; a second barbecue of the day.  It is quite extraordinary how much food my Korean family gets through, they always seem to be eating, they are grazing all day.  None of them are fat, however, and my guess as to why they aren't is that they only really eat meat and vegetables, hardly any carbohydrates except for the odd small bowl of rice and never any junk food.

My wife had a bad stomach so for most of the night I was having to hold conversation with her family by myself, which went quite well.  I think I gave the false impression from my article that I speak very little Korean, from my perspective of having a Korean wife and family, I think I do not speak that much, but from a foreigner in Korea standpoint I am probably rather good at speaking Korean.  With my family I feel especially inadequate, though.  Because we are always in such a large group it can be difficult to get in on conversations and concentrate hard enough about what is going on.  Hours of listening to 6 or 7 plus people speaking Korean very fast with some slang thrown in can be very tiring, trying to listen is the only way you can get a foothold in the conversation and speak yourself.  One on one conversations are always much easier, but I rarely get the chance of these when I am with my wife's family.

My wife's uncle was trying to encourage me to go for a walk in the morning to a temple about 5 or 6 Km away.  I was at least partially interested, except he wanted to leave at 4am in the morning, so I said I would think about it and see how I felt.  When the morning came he tried to wake me up at 4am and there was no chance I was going to go.

Whenever I have spent a weekend with my in-laws or spent back to back days with them, my struggles have often been most apparent.  I think there are a few reasons for this; a) after a long day of sitting uncomfortably on the floor and sleeping on the floor my body is usually a little achy the following day, b) I feel mentally drained from listening to so much Korean and speaking it, c) I never know where or what we are doing next, and d) I have eaten so much protein and not enough carbs that I feel tired.  On the Sunday, therefore, I realised that my patience might be tested, however I was ready to work hard at not get too fed up and take it all in my stride having accepted the critics viewpoint.  It was to prove to be a really frustrating day.

The rough plan was that we would be leaving the pension at 11am and may visit a couple of areas, but be home by about 1 or 2 o'clock.  After some general wondering around going back and forth and not really doing anything, it seemed like it was about time to go home, but the head of the family had other ideas.  The father in-law wanted to go to a near-by town (Damyang) specifically to eat in one famous restaurant.  When I say near-by, it was actually an hour and a half drive away, just to eat lunch remember.  I was slightly irritated but tried to check my frustrations remembering the criticism I had received.  On arrival at the town we could not find the restaurant and were stuck in traffic by a popular noodle-eating spot with lots of restaurants where we sat and ate.  Still determined to find the restaurant, however, my father in-law asked around, got a little more lost and eventually, about 2 and a half hours after we had set off to find it we arrived.

The next problem was because of the restaurant's notoriety, it was heaving with people.  We asked at the desk and the waiting time was about one hour.  We were ordered to sit it out by my wife's father.  With a calm outward appearance, except for the odd twitch starting to develop in my left eye, I asked my wife just why we had taken a now 3 and a half hour detour just when we were supposed to be arriving home merely to eat in a restaurant.  She said that there are different specialty foods all over Korea that towns and provinces are famous for and many Koreans like to visit and sample it for themselves.  Apparently it simply can't be imitated with the same quality, even if other towns or cities are only a matter of tens of miles away.  I was sceptical.  There is a Korean type of logic and reasoning present in many situations that is quite lost on me, I suspect most foreign teachers living in Korea will know what I am talking about.

The situation was being made worse by the searing heat, over thirty degrees and humid.  I hate Korean summer and for the first 20 minutes or so we all had to wait outside as there were so many people waiting inside already.  The owners of the restaurant had some rabbits outside, maybe to amuse the people who had to wait and a few people were going over to feed them, so I had a look.  I have never been overly satisfied with the treatment of pets in Korea and this was no exception; 3 rabbits in a tiny cage, no bedding, dirty, and in the middle of summer with no water either.  One rabbit looked as if it might drop dead right in front of us, so hot it was unable to move.  I asked around for some water for the rabbit, but was looked at rather strangely and then thought the rabbit would probably be better off if it died sooner rather than later anyway and stopped trying.  It was turning into 'one of those Korean days'.

Despite all this, I put myself into a frame of mind where I was not going to be too bothered by it all.  My brother in-law had actually been complaining for about 2 hours that he needed to get back home and meet a friend and was looking thoroughly unamused with it all.  This didn't go down at all well with the rest of the family but I had some sympathy for him, whilst at the same time being rather proud of myself for lasting for so long and not breaking before him.

We eventually sat down and the food came and it was alright, nothing overly special.  The food was tteokgalbi, which I thought I had before but was something rather different, basically it was posh hamburgers with the usual side dishes.  None of us were that hungry as we had eaten noodles a couple of hours previously, so it was all rather a strange exercise to go to so much trouble to eat a restaurant when none of us actually wanted to eat anything.

After another couple of hours in the car driving home, we eventually arrived 5 hours later than planned.  I was exhausted and hot (I slept with an ice cold bottle of water under my shirt most of the way back) but the wife was very happy with me, so I guess I performed well over the weekend.  My attitude was probably a little better but I still view these outings as a bit of a trial.  It is difficult not to when you are not in the loop, and this has nothing to do with the language barrier either as my brother in-law and my wife are not in the loop either.  Decisions are made completely on the whim of the older men, my uncle and father in-law and we all have to follow.  I can improve my attitude and try harder but I find it hard to believe that I will ever be entirely comfortable with that situation.