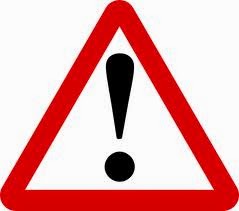 I was recently invited onto a panel discussion on tbs eFM Primetime - an English speaking radio station in Seoul - to talk about safety in Korea.  I was originally invited to give my point of view about South Korean cultural involvement in the Sewol tragedy, but couldn't do it, so they invited me to the next relevant debate instead.

Because I live about as far from Seoul as you can be in Korea, I was not able to appear in person in the studio, which was a pity, but I gave some points in a short telephone interview.  You can listen to the whole program by searching here (on Wednesday May 7th) and I found the perspective of the two university professors in the studio quite interesting.

I won't go into the whole discussion, for this post I will only focus on one aspect of the debate.  During the discussion on the radio, both myself and one of the professors in the studio came up with an interesting point about getting into good habits regarding safety.

I actually think Koreans are being a bit hard on themselves and the other professor in the discussion made some quite scathing comments about Koreans being uncivilised, uncaring, even describing them as animals for such things as not forming orderly queues.  Many articles have also been written in the Korean media about how they as a society care too much about money and getting things done quickly and don't care about people enough. Perhaps there is some truth to this, it's possible the country as a whole has become too obsessed with success and economic development and it was certainly a factor in the poor safety practices at my wife's hospital when she worked in Korea.  But I think a general lack of safety awareness and a poor understanding of risk are the greater culprits.

The situation on the roads is a perfect example of this.  In my experience, lots of people cross the road without looking both ways, sometimes not even looking at all or with their heads buried in their smart phones. Inside cars, I have had the experience of siting in the back of a car with a Korean mother driving with her son of 12 years old in the passenger seat and who was wearing no seat belt and have friends who recall similar experiences.  I also get regular lifts to play squash with a man who has a young daughter (4 years old) who sits with no seat belt on in the back seat while he drives at ridiculous speeds, weaving in and out of traffic, while texting and calling people on his phone.  I shut my eyes and pray for the best.

I should say something in these circumstances, and I would in my own country in the same situations (I doubt whether it would ever happen though), but if I did (especially in my clumsy Korean) I would be worried that it would come across as me insinuating that they don't care for their children or that they are bad parents. Just like the person who tells the mother of a screaming baby on a long-haul flight to keep him/her quiet, you are never the good guy in such situations.  Perhaps I should say something anyway, it might save their lives one day.

Yet, from what I know of this mother and of my friend who I play squash with, they would do anything for their children.  I am sure they would throw themselves in front of a bus or run into a burning building to save them.  I see them dote on them and I simply can't believe that they don't care enough.  And the people with their heads in their smart phones as they cross the road; what monetary gain or time-saving are they getting out of doing it?  And don't they care about their own lives?

It leads me to think that probably the main issue here is ignorance of risk and safety and that this state of being leads easily into ignoring it for profit and time saving.  I think this is cultural as I see it everywhere. People's everyday habits and actions are just not attuned to common dangers.  Most of these good habitual practices can be taught and drummed into people of a very young age and it can start as soon as children can walk and talk, pick up chopsticks or a knife and fork, or learn about respecting their elders in speech.

Crossing the road is a classic example of this.  Much of the time, I can find myself walking around in something of a day dream, my senses aren't heightened to danger all the time, even when I am crossing the road (although I do make more of a conscious effort in Korea).  But by force of habit, when I hit the edge of a pavement, I look both ways.  The funny thing is that it took about a year of living in Korea to look the correct way at the correct time when crossing the road, because in England the traffic comes from the opposite direction.  I found myself being more careful because my brain was so confused.  You'd think it would be simple, just look the opposite way when you should, but so ingrained the behaviour was, it took almost a year of crossing streets day in day out to get over it.

Whilst I think England has much better habits when it comes to safety, I have increasingly felt that the country has gone too far in its concern for it.  Masses of red tape need to be dealt with even relating to the most minor risks imaginable.  Health and safety has become something that people really detest and it causes a significant reduction in civil liberties and personal responsibility due to the laws and other obstacles you have to overcome to do almost anything at all.  It also opens people up for being liable for other's injuries and too many people seek compensation when they don't deserve it.  One of the things I enjoy about Korea is that I feel freer living here.  I hope it is not inevitable that, in time, improving health and safety will turn into an unhealthy obsession with it, like in England.  Why oh why can we not meet in the middle between the two cultures, on this and many other issues?