Funny, sad, and revealing answers to questions from Korean students. 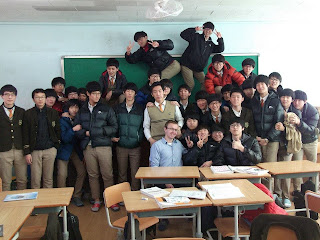 I think most Native English teachers living in Korea really end up quite liking their students.  There are also many that despise them, but if you can build up a rapport with them I find they are really great.  I have always found that I am unable to do this with very young students of about 10 years old and younger, but have always enjoyed teaching the older students.  This was something that was the same back home in England when I worked in schools and coached squash.

In Korea, I have taught in two different Hagwons (private academies) and an all-boys high school, with the high school being my favourite place.  Still, working in the Hagwons I was able to have some good relationships with the students, but with the very young students I more than once had the temptation of picking them up and throwing them out of the 3rd storey window.  I never get this urge with my high school students.

My problem with young kids was, and still is, that I treat them like adults and I have no idea how to behave with people in any other way.  This on the other hand is a great advantage with high schoolers who desperately want to be treated like adults and I think this explains why we tend to get along so well.

Anyway, the fact they are quite comfortable with me does bring up some humorous situations as I explained in a previous blog post on 'My Students' http://smudgem.blogspot.kr/2012/03/my-students.html.  Over the last few months I have been jotting down some amusing - and sometimes sad - answers to questions which I thought were worth sharing.  Their answers also give an interesting perspective on Korean culture and how young Korean males think.  Strangely, most of these answers came in just a few special lessons:

The 'likes and dislikes about Korea' lesson

I asked the students, 'What do you like about Korea?'

This is all about the contentious island of Dokdo and the national obsession with the sovereignty of the island being Korean and not Japanese.  They learn all about the island at school and I have even seen a small textbook devoted to the subject.  The answer seemed to convey very little of the students own thinking on the matter about possible resources located near the island and therefore its importance.  It looks like an example of a sort of forced caring for a subject that they should probably have no interest in.


Student: 'I like Korean girl groups because they give our sight satisfaction.'
Me: 'I agree.'

The first of a few amusing comments on girl groups.  Girl groups really are pretty in Korea, there is no doubt about it and this is not lost on young men with hormones raging.  However, this subject of Korean girls did lead on to what they disliked about Korea.

I asked the students, 'What do you dislike about Korea?'

Student: 'I hate that Korean girls have a small bust, average A cup.'

Student: 'I hate that Korean women have small chests because grip feeling not good.'

As a teacher, I should not be overly impressed with responses 3 and 4, I know, but they were quite funny.  This shows that Koreans are not that much different to us in the West, in that they want what they do not have.  If they lived a long time in the West they would probably complain about the lack of short skirts and great legs.

The 'Insults and Compliments' Lesson

This lesson was about making insulting comments and complimentary comments about others (asking for trouble, I know).  The students relished the insulting part of the lesson, 'you son of bitch, what the hell, you ass hole' and more was what I asked for and got in the lesson, but one comment in particular showed the racial prejudice that exists in Korea, even though it was delivered with a kind of comedic poetry to it.

On watching a video of a very dark-skinned Englishman of Pakistani origin doing a poor singing performance, one boy commented:

Student: 'My heart is black because you are black.'

He said it was a joke after and, of course, quite a few laughed but the number of times the students call their slightly darker-skinned classmates 'nigro' or mention that 'he is from Africa' does tend to show up a classically unwelcome prejudice that many Korean people have.  Despite always showing my disgust for such comments, the odd one still does crop up from time to time.

I thought twice about delivering this lesson as I was afraid it could upset people but in the end there was nothing to worry about and they approached it as light-heartedly as ever.  As part of the lesson they had to give arguments for and against the existence of god (obviously put in much simpler terms).  It turned out that the vast majority of students did not believe in a god but they worked well and gave answers from both points of view, the most amusing coming from the perspective that there is no god:

Student: 'There is no god because Jeong Seon's (his friend) face is disaster.  If there is a god, he will be killed but he has already lived 17 years!'

I was really trying hard not to laugh at that, although the boy it was aimed at did not seem too bothered and just punched his friend in the arm.  This is a fairly typical example of Korean classroom banter.

Another student simply had this to say: 'There is no god because monkey, evolution = upgrade.'

Richard Dawkins himself could have put it no better.

One activity involved choosing their five best superpowers (translated for them) and saying what they would be, followed by giving themselves a superhero name, here is what one group had to say:

Student: I would have, invisibility, teleportation, shape-changing ability, x-ray vision, and telepathy.  My superhero name would be 'Pervert Man'.

They would later explain to me that all of the above were methods of either sneaking into places they could see naked girls, disguising themselves in these places so they could not be seen, looking through walls and clothes, or using the power of their minds to encourage girls to take off their clothes.

The grammar point of of the lesson was for them to say, 'I feel _________ when I....'
They needed to insert the emotion in the blank space and say when they felt upset, angry, happy, excited, etc.  I received an especially depressing and sad answer from one student, who can be immediately recognised as educationally sub-normal and a target for bullies.

Student: 'I feel upset when I look in the mirror.'

Said with not the least bit of a smile on his face, I felt like giving him a big hug, poor kid.  There is surely bullying in schools all over the world but in Korea, where students can spend 14 hours a day in school, it must feel like it is impossible to get away from bullying if you are the victim of it.  This must contribute to the Korean problem of suicides of students, especially in high school.  I make sure that this student is treated well in my class and have had words with his classmates when I feel like they are making fun of him.  In general, though, the class seem to have mostly a feeling of warmth towards him.  This does not stop him feeling bad about himself, however, as a lesson on personal pet hates showed.

The same poor student had this to say about one of his hates: 'I hate myself because I look terrible and I am not smart.'

I genuinely did not know what to say to him after he said that, I really worry about him sometimes.

The last comment is quite funny and a bit troubling at the same time, coming from the same lesson from a very high level - but cheeky - student, about his Korean English teacher.

Student: 'I hate Lee Gang Ho because he hit me with a light bulb.'
Me: 'What, a light bulb?!'
Student: 'Yes, he smashed it on my back.  Look there is a light bulb missing above your head.'
Me: 'I don't believe you.'
Whole class: 'No, really!'
Me: 'Why?!'
Student: Because he was sleeping in the class and I told him the principal was coming.  He woke up suddenly but when he realised he was not coming, he hit me.'
Me: 'But why with a light bulb?'
Student: 'He forgot his stick.'

I wasn't really sure whether to believe this story but all the students in the class backed him up and this particular teacher is infamous in the school, and from experience with him personally he is a bit of a strange kind of guy even by older Korean man standards.  If true, surely this is a prime example of corporal punishment gone a little to far.  Corporal punishment is often used by teachers in Korea.  In my school I have witnessed it a few times and it has really been no big deal, in fact it tended to work rather well.  However, I would quite like to be a fly on the wall in the infamous Mr Lee's class to see just how he utilises it.

Email ThisBlogThis!Share to TwitterShare to FacebookShare to Pinterest
Labels: All in Good Fun